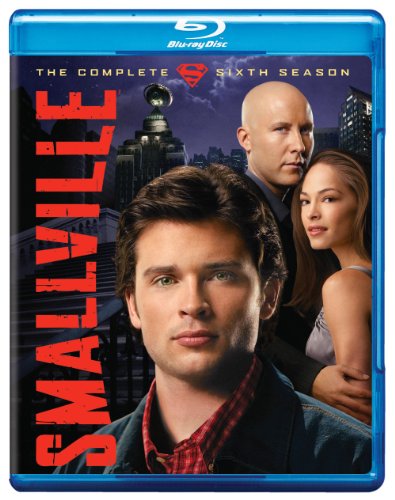 Brand : Warner Brothers
from USA
to Poland
in 5-8 days
At your doorstep by Jun 20  to Jun 23 with standard delivery

Smallville: The Complete Sixth Season (BD) They tried to be friends. But their chosen paths set them on a collision course. The Clark Kent-Lex Luthor rivalry explodes into the fierce good- versus-evil battle fans have long expected in Season 6 of the spectacular series that reinterprets the characters and events of Superman mythology from its roots. Adding to the rivalry: Lana Lang becomes Mrs. Luthor. Clark/Superman would be stunned to find out why she says yes. But that’s not all that’s stunning. Green Arrow forms a Super Hero league. Will Clark join? Phantom Zone escapees menace Earth. Can Clark stop them? LuthorCorp expands its dark experiments. Will an awesome kryptonite-powered army be the result? The answers – and thrills – are here! ]]> .com ---- Picking up where its fifth season left off, Smallville's sixth season begins with Metropolis in ruins, Clark (Tom Welling) trapped in the Phantom Zone, and General Zod inhabiting the body of Lex (Michael Rosenbaum). Even when that situation, dubbed "Black Thursday," is over, Clark still has to capture the criminals who escaped from the Phantom Zone. Meanwhile, having driven away Lana (Kristin Kreuk), she finds comfort in the home and arms of Lex, driving further anxiety into that romantic triangle that has expanded to include Chloe (Allison Mack, still with a smile that lights up the orb on top of the Daily Planet) and her new beau, photographer Jimmy Olsen (Aaron Ashmore). And Lois (Erica Durance)? We see hints of her inevitable future in her becoming a reporter for the tabloid rag The Inquisitor ("The thrill of discovery, the clack of the keys, the scent of fresh ink I think I've finally found my calling!") and flashing some sparks with Clark especially in a Valentine's Day episode called "Crimson." She also finds a new boyfriend in Oliver Queen (Justin Hartley), a tycoon who moves from Star City to Metropolis and revives a boarding-school rivalry with Lex. But Queen is also a superhero, the Green Arrow, and he's out to thwart Lex's project called 33.1, which runs tests on meteor-powered humans. And in an awesome episode called "Justice," the Green Arrow gathers his team--Bart Allen (Kyle Gallner), a.k.a. Impulse (a change after he was first called the Flash); Arthur "AC" Curry (Alan Ritchson), a.k.a. Aquaman; and Victor Stone (Lee Thompson Young), a.k.a. Cyborg (who had all appeared in the series before)--with Clark to shut down Lex. Yet another hero from the comic books--an interplanetary detective (Phil Morris)--helps Clark fight rogue Kryptonians. It all ends in a slam-bang finale with a number of surprises. Even though the Lana drama went on too long, Green Arrow and some choice episodes stuff made this one of Smallville's best seasons. Guest stars include Tori Spelling as a nosy gossip reporter and Lynda "Wonder Woman" Carter as Chloe's mom. Bonus Blu-ray features include deleted scenes in high definition, a 25-minute history of Green Arrow in comic books and on TV, a 30-minute fan spotlight, and two Smallville Legends tie-in series: a crude CGI series on Green Arrow that fills in his back story, and Justice & Doom, an animated comic book about the team. --David Horiuchi
Show More
Reviews

Disclaimer: The price shown above includes all applicable taxes and fees. The information provided above is for reference purposes only. Products may go out of stock and delivery estimates may change at any time. Desertcart does not validate any claims made in the product descriptions above. For additional information, please contact the manufacturer or desertcart customer service. While desertcart makes reasonable efforts to only show products available in your country, some items may be cancelled if they are prohibited for import in Poland. For more details, please visit our Support Page.